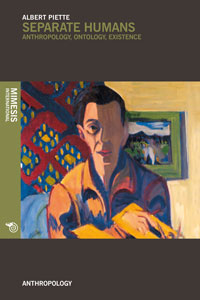 This book is a theoretical essay that lays foundations on which to build an anthropology directly focusing on human units. In the first chapter, the author attempts to show that the evolutionary specificity of humans constitutes an argument in favour of this perspective. The consciousness of existing in time and nuanced modalities of presence call for a detailed observation of humans. The second chapter is a critique of the abundant use of the notion of relations in social anthropology. This critique is necessary because of the extent to which the various theoretical and methodological uses of relations absorb and lose existences and their details. The third chapter concerns nonhumans, another major theme of contemporary anthropology. Albert Piette sees a certain debasement of the notion of existence and proposes a realist ontology, considering what does and does not exist, from the examples of divinities, animals and collective institutions. It is not a matter of being satisfied with an analysis of ontologies or local metaphysics, but also showing what really is in a situation, and not just from the point of view of people and their discourse. This analysis leads to a classification of beings and to a consideration of the importance of minimality in human existence.