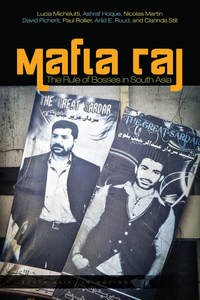 Mafia Raj: The Rule of Bosses in South Asia

"Mafia" has become an indigenous South Asian term. Like Italian mobsters, the South Asian "gangster politicians" are known for inflicting brutal violence while simultaneously upholding vigilante justice—inspiring fear and fantasy. But the term also refers to the diffuse spheres of crime, business, and politics operating within a shadow world that is popularly referred to as the rule of the mafia, or "Mafia Raj."

Through intimate stories of the lives of powerful and aspiring bosses in India, Pakistan, and Bangladesh, this book illustrates their personal struggles for sovereignty as they climb the ladder of success. Ethnographically tracing the particularities of the South Asian case, the authors theorize what they call "the art of bossing," providing nuanced ideas about crime, corruption, and the lure of the strongman across the world.

Lucia Michelutti is Professor of Anthropology at the University College London.

Ashraf Hoque is Teaching Fellow in the Department of Anthropology at the University College London.

Nicolas Martin is Assistant Professor at the University of Zurich.

David Picherit is Research Fellow at the French National Centre for Scientific Research.

Paul Rollier is Assistant Professor in South Asian Studies at the University of St. Gallen.

Arild E. Ruud is Professor of South Asian Studies at the University of Oslo.

Clarinda Still is Research Associate at the University College London.

"Through meticulous and uniquely collaborative ethnography, Mafia Raj opens readers' eyes to the murky world of bosses in South Asia. With unforgettable portraits of the gangsters, politicians, hustlers, and extortionists dotting the region, this is the rare scholarly account that upends our commonly accepted notions of democracy, formality, and legitimacy."

"Why does the figure of 'the boss,' in its various guises, loom so large in South Asia? In answering this question, the authors of this engagingly written book make a path-breaking contribution to the study of South Asian politics."