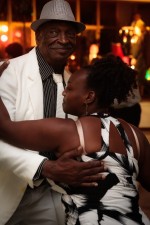 In Campinas, São Paulo, Black men and women, between 70 and 90 years of age, are active in the Black cultural movement of the city, which is mainly concerned with recreating so-called traditional Afro-Brazilian musical repertoires. Although they are seen as Mestres (lit. “masters”, “teachers”) in present-day musical communities, their youth memories have directly to do not with jongos, sambas de bumbo or maracatus, but with gala balls. In context of the 1940-1960 period, characterized by severe segregation, in the interior of São Paulo, these dance balls, which were frequented mostly by Blacks, are revisited in film, in ways that reveal their importance in the formation of a Black community which, having begun in the past, is much alive today.