This comparative research centre was founded by Éric-de-Dampierre in 1967. Its main location is the Maison des Sciences de l'Homme Mondes (building René-Ginouvès), while its two specialised centres, the CREM (Centre for Research in Ethnomusicology) and EREA (Teaching and Research in Amerinidan Ethnology) have been housed on campus in the Max Weber building since 2016.

Since its establishement, the laboratory has combined research and teaching. Teaching, in the bachelor's and master's programs, is managed by the unversity's Department of Anthropology. PhD research training takes place in the Doctoral School "Environments, Cultures, and Societies of the Past and Present." Researchers' and professors' involvement in teaching, and student participation in research and other laboratory avtivities together ensure that research and teaching remain integrated.

The laboratory's research Éric-de-Dampierre Library contains several private, printed collections as well as scientific arhival collections. Currently, the library is in the process of digitzing and enhancing its archives. With the Laboratory of Social Anthropology's library, Éric-de-Dampierre is a founding member of two library networks, the Ethnology Network and the Network of Ethnologists' Archives, which, since 1999, regularly hold conferences and field studies.

The LESC also has a publication service, which edits its electronic, generalist anthropology review, Ateliers d’anthropologie, as well as monographs and collective works.

Éric de Dampierre, then head of EPHE Section VII (which would later become EHESS), joined the Faculty of Arts at Nanterre in 1965. At the beginning of the 1966 academic year, he created a course in ethnology, and, in 1967, established the Laboratory of Ethnology and Comparative Sociology, with most of its members being professors at University of Paris Nanterre. The laboratory joined CNRS in 1969. The first doctoral thesis in ethnology would be defended the same year, by Manga Bekombo Priso.

Since then, the lab's affiliation with CNRS has solidified. Having become a joint research unit between CNRS and University of Paris Nanterre in 1989 (UMR 116, then UMR 7535), in 2006 the LESC merged with the centre for Teaching and Research in Amerindian Ethnology (EREA), and in 2007 with the Centre for Research in Ethnomusicology of the Musée de l'Homme (CREM), becoming UMR 7186 and officially integrating these two research units as specialised centres of the LESC.

In 1997, the LESC moved from the ethnology department (Building C, first floor), where it had been located since its inception, to the Maison de l'Archéologie et de l'Ethnologie René-Ginouvès (MAE).

Anthropology, as a discipline, has undergone many changes in recent years. As the LESC adapts to these changes, it continues to draw on its historic principles: first, a broad, comparative perspective and, second, an emphasis on long-term fieldwork that in turn contributes to theoretical discussions.

A generalist scope: Thanks to its comparative perspective and its broad inventory of societal forms and cultural diversity, the LESC contributes to a critical knowledge on the characteristics univeral to all humans. One such characteristic – though it is not unique to humans – is the ability to organize themselves into societies, and to form mental representations of themselves in society. This perspective is bolstered by the laboratory's size and flexible organisation; the large number of researchers facilitates thematic reinterpretations and innovation.

A scientific practice constantly combining fieldwork and theoretical elaboration: Since its foundation, the LESC has stressed long-term fieldwork, which includes learning the local language(s) and, if possible, returning to the field repeatedly; the materials collected over years, if not decades, serve to build theory. The primacy accorded to fieldwork and to the production and preservation of ethnographic material and data – a top priority of the Éric-de-Dampierre Library – is consistent with with a (non-exclusive) emphasis on remote locations.

In its quest for rigorous ethnographic description and interpretive models drawn from comparative sociology and social anthropology, the LESC places great importance on analysing forms of social organization and on interpreting systems of representation found on all five continents. Ethnographic methods are becoming more diverse, and now include tools from interactionist sociography, quantitative methods, and experimental models inspired by the cognitive sciences. Still, institutions of all types remain a central concern of the LESC.

Mastery of the local language(s) is prioritised, whether they have a standardized writing system or not. Within the LESC, there has long been a fertile dialogue between ethnology and linguistics, in particular ethnolinguistics, including recent developments in linguistic pragmatics and the cognitive sciences. The EREA, in particular, is interested in these fields; the ethnomusicologists at the CREM, on the other hand, favour a cognitive approach.

History has long been a central concern of LESC researchers: the comparative exercise begins with contemporary materials, but analyses them through a historical lens, including the context in which they were collected. Diachronic comparison can reveal structural changes and continuity, and also the means of transmission or rupture that organize the perpetuation and the transformations of societies and cultures.

Interdisciplinary dialogue is intensifying and opening new areas of study on the edges of established knowledge. The LESC participates in this movement by forging crossdisciplinary research topics with geography, political science, psychology, and life sciences, and is opening new fields of study that intersect with the history of science, the anthropology of art and technology, museography, and even robotics.

The LESC is working to transform anthropological knowledge and redefine anthropology’s intellectual sphere, and, furthermore, hopes to contribute to ongoing epistemological inquiry and research in the discipline. 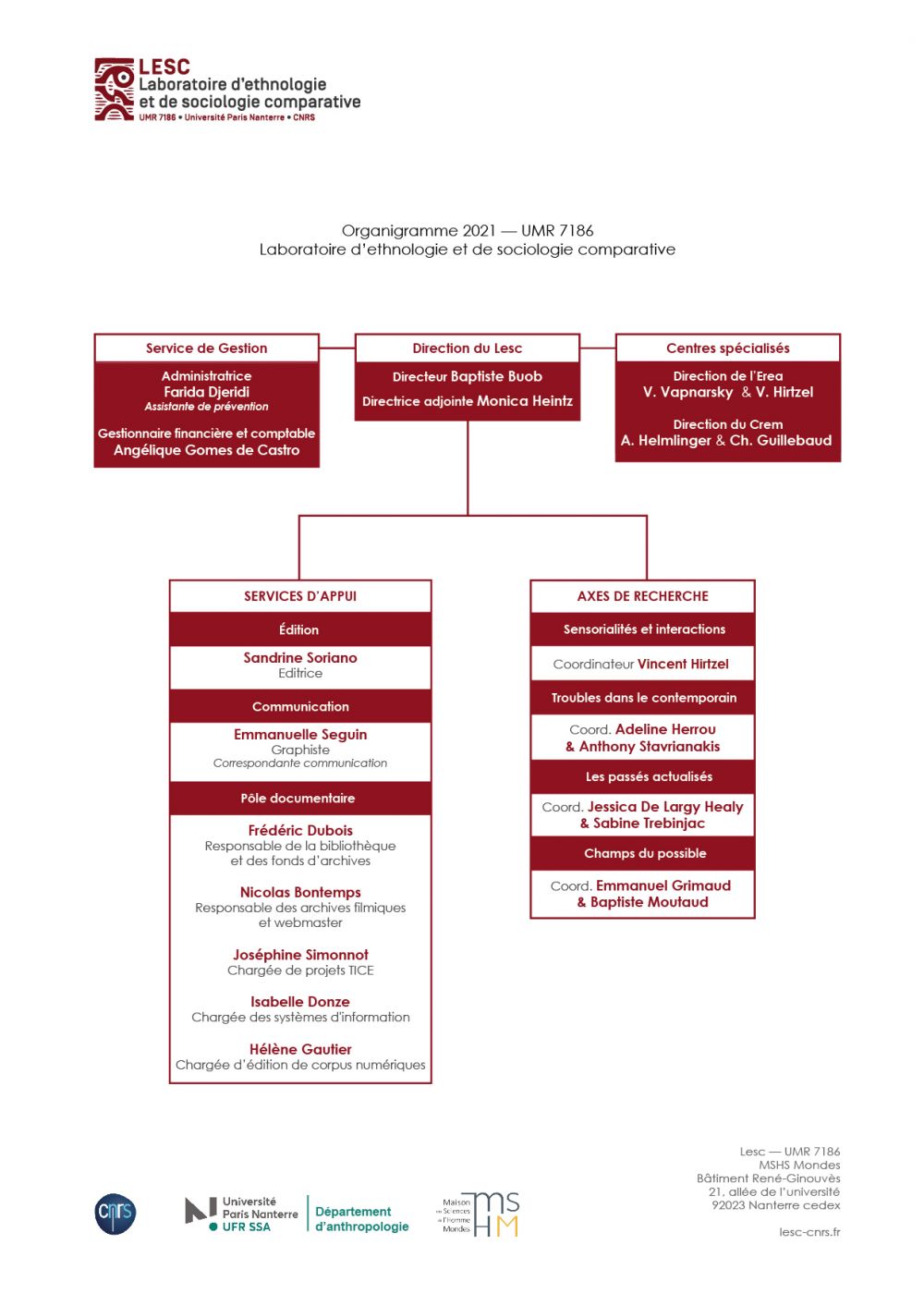 Lesc-UMR 7186 - MSH Mondes – 21, allée de l’université – 92023 Nanterre cedex
33 (0)1 46 69 25 90 – This email address is being protected from spambots. You need JavaScript enabled to view it. – Mentions légales
Save
Cookies user preferences
We use cookies to ensure you to get the best experience on our website. If you decline the use of cookies, this website may not function as expected.
Accept all
Decline all
FLEXIcontent
FLEXIcontent
Accept
Decline