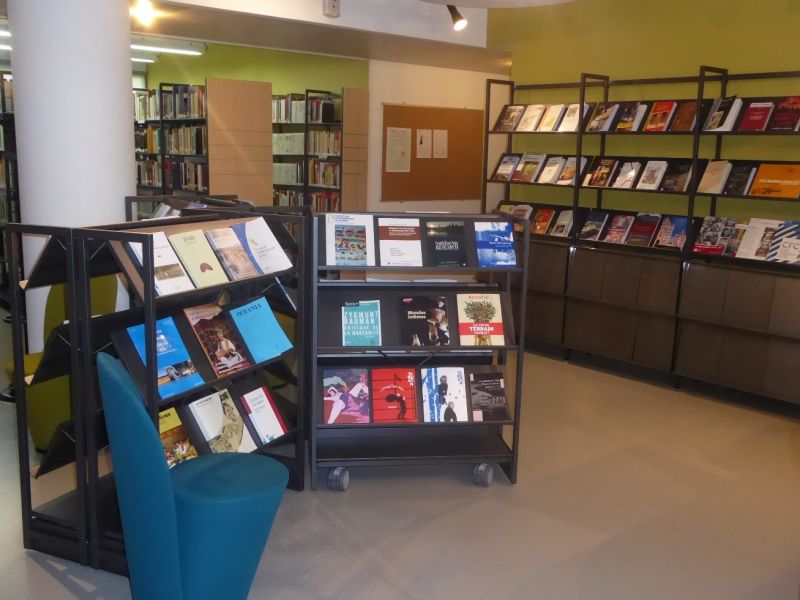 Created in 1967 by Éric de Dampierre, the library houses valuable and original collections of works and periodicals reflecting the labroatory's comparative and transcultural research orientation. The library is endowed with a general collection of around 50,000 documents, as well as some thirty libraries of researchers or associations deposited over the years.

The library preserves and allows access to more than 30 scientific archive collections, mainly produced by ethnologists since 1930 (https://www.archivesethnologues.fr/). In gathering these archive documents and publications together in a single location, the library enables a unique approach to ethnology and its history.

The library receives, in order of priority, researchers, research professors, doctoral students, and masters students of the Department of Anthropology (université Paris Nanterre). Authorization for temporary access can be granted to individuals wishing to consult the special collections. Opening days and hours are indicated on the homepage of the catalogue.

For all details, especially regarding opening hours during university vacations, you can reach us at 01 46 29 26 18 or send us a message at: This email address is being protected from spambots. You need JavaScript enabled to view it..

Borrowing materials is reserved for laboratory researchers, Ethnology Department research professors, and doctoral and masters students in ethnology at University of Paris Nanterre. It is possible to borrow up to five works less than thirty-years old for a duration of 21 days.

The Éric-de-Dampierre Library is located on the garden level of the MSH Mondes (René-Ginouvès building) on University of Paris Nanterre's campus.

A century of history

The establishment of CNRS - Musée de l'Homme's sound archives is the outcome of a long history of scientifc research on music. The birth of ethnomusicology, then called "comparative musicology" coincided with the invention of the first recording devices at the end of the 19th century. Since then, the recording of musical documents, as well as their classification and their analysis, have occupied a central position in our knowledge of the Musical Person.

The preservation of sound archives began in 1932 with André Schaeffner's opening of the Phonothèque at the Trocadero Museum of Ethnography (which would become the Phonothèque of the Musée de l’Homme in 1937). On the initiative of Gilbert Rouget, a "Laboratory of Sound Analysis" was created in 1967, as well as a CNRS research team the next year. In 1985, CNRS and the Musée National d'Histoire Naturelle decided to combine their efforts to preserve these vast collections, christened since then the "CNRS - Musée de l'Homme Sound Archives". Tightly linked to research, the archives are bolstered and fueled by researchers' field missions on all the continents. These data collections enable laboratory research projects, diachronic and synchronic comparisons, the preparation of new fields, and teaching to university students. A small part of these archives has been published, in 78 rpm-discs (notably by Africa Vox), 33 rpm discs, and CDs (Chant du Monde, Harmonia Mundi). Currently, the digitization of analogue mediums continues thanks to the support of the Ministry of Culture and Communication and the National Library of France. The Center for Research in Ethnomusicology, located at the University of Paris Nanterre since 2009 as part of the Laboratory of Ethnology and Comparative Sociology, brings this unique heritage into the digital age, thanks to its innovative web platform, as well as into a long-term preservation (TGIR Huma-Num).

The catalogue is structured around 4 descriptive levels: Fonds, Corpus, Collection, and Items. The main descriptive level is that of the Collection. Each collection gathers a coherent group of audio files (Items) corresponding most often to recordings collected during the same research mission, or to a published disc. Certain collections are themselves grouped into a Corpus and into Fonds associated with particular collectors.

The number of recordings uploaded onto the platform is constantly increasing. Descriptions are entered in a collaborative effort between the platform's users: researchers, students, and archivists. The CREM welcomes all collaborations that aim to enrich and enhance this valuable heritage. Write us if you wish to contribute.

CREM uses the collaborative platform Telemeta in order to make the archives accessible to the scientific community, and, when possible, to the public, while still respecting interpreters' and collectors' legal and ethical rights. Developed with the support of the CNRS and the Ministère de la Culture et de la Communication, this tool allows researchers to enrich and exchange data online with the music-producing communities in their countries of origin, particularly by means of tools such as time markers, comment sections, etc. Navigation is faciliated by various options for the graphical display of sound.

CREM manages the platform, and a third of the digital recordings are freely accessible online. The site welcomes all collaborations aiming to enrich and enhance this valuable musical heritage common to all of humanity. Presently, more than 2,000 hours of recordings are consultable with an access code, and on site at the CREM (University of Paris Nanterre, building Max Weber (W), room 112), as well as at the Eric-de-Dampierre Library, the Quai Branly Museum's mediatech, and the library at the Musée National d’Histoire Naturelle.

GeoEthno is a geographical thesaurus designed for the geographic indexation of documents in the domain of anthropology. It is a library tool enabling the establishment of standardized lists of keywords that can be used to index and search the Éric-de-Dampierre Library's bibliographic database (the catalogue), and more largely in other library-members of the "Ethnology Network".

The GeoEthno thesaurus indexes geographic names with their different variants, and chooses among them a "Preferred Term" or "Descriptor" which, if applicable, will be used as a keyword to geographically characterize a document. Next, this keyword will be applied to the database query, and all documents indexed with it will appear as a search result. The keywords will also more easily identify documents which do not necessarily respond to the search, namely by highlighting parts of the content.

As a result, the thesaurus, which focuses on document retrieval, differs from terminology or toponymic databases, and GIS (Geographic Information Systems).

Warning: The GeoEthno thesaurus does not include integrated mapping. Furthermore, because it is a developing and evolving tool, its geographic coverage is neither regular nor exhaustive. Updates are applied regularly. The thesaurus covers global geographic areas and does not specialize in a particular region. Its coverage is mainly focused on the informative needs of the ethnology library.

NICOLAS BONTEMPS
Responsable des archives filmiques et webmaster
This email address is being protected from spambots. You need JavaScript enabled to view it.

ISABELLE DONZE
Chargée des systèmes d’information
This email address is being protected from spambots. You need JavaScript enabled to view it.

HÉLÈNE GAUTIER
Chargée d’édition de corpus numériques
This email address is being protected from spambots. You need JavaScript enabled to view it.

ESTHER MAGNIÈRE
Chargée du traitement des données scientifiques
This email address is being protected from spambots. You need JavaScript enabled to view it.

Consortium of Ethnologists’ Archives
The Consortium of Ethnologists’ Archives strives to support researchers, projects, and research libraries in the conservation, treatment, enhancement, and availability of materials produced during ethnographic missions and related to anthropological fieldwork. The consortium endeavours to identify the specific issues facing ethnologists concerning the singularity of their data, the patrimonial ...
Tous les projets

Lesc-UMR 7186 - MSH Mondes – 21, allée de l’université – 92023 Nanterre cedex
33 (0)1 46 69 25 90 – This email address is being protected from spambots. You need JavaScript enabled to view it. – Mentions légales
Save
Cookies user preferences
We use cookies to ensure you to get the best experience on our website. If you decline the use of cookies, this website may not function as expected.
Accept all
Decline all
FLEXIcontent
FLEXIcontent
Accept
Decline